HomeAnimalsSiamese Mouse: Everything You Need To Know (With Images) 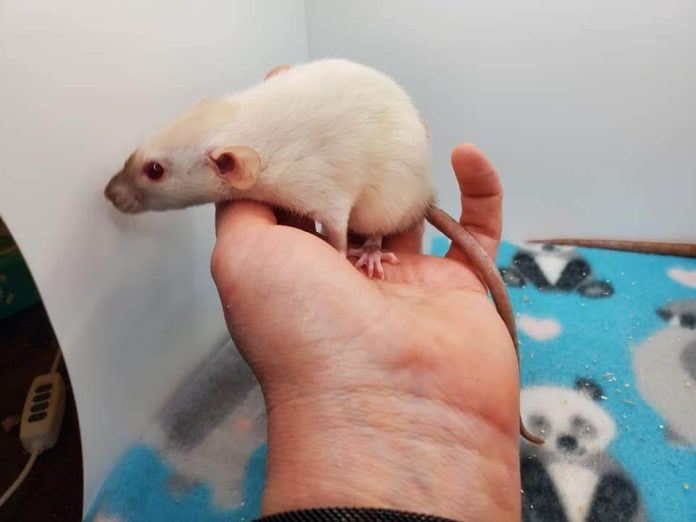 Is there such a thing as a Siamese mouse? Yes! Just not very popular. And we have covered everything you need to know about them in this article.

Most Basic Info You Need To Know About A Siamese Mouse

Siamese mice have a distinctive color-point type. Their nose, feet, and bum have distinct color-point features. They also have shading over their bodies. The Seal Point Siamese is the most common. It is Black-based ( aa)c(h). When someone simply says “Siamese,” they usually mean a Seal Point with Ruby Eyes. Siamese comes in many colors, and if they are born with the black-eyed gene, they will have Black eyes (Be c(h?)c(h).

They can change their colors! a siamese mouse begins life in dark shades of beige (if they are black-based/Seal Point). However, their color changes and their points darken on their first molt. They then develop a creamy body and points on their nose, ears, and feet.

A Siamese pattern is caused by a bit unusual cause. This is called acromelanism, and it develops due to its thermosensitivity (the fur’s color is affected by the environment). The fur will get darker the colder it gets. The fur of the colder areas (nose, ears, and tail) is darker than that of the warm body. This is why a Siamese mouse is darker during winter than in summer.

According to the AFRMA standard, they are described as follows: “Body color to range from medium beige to darkest at the base of the tail and over saddle and hindquarters towards the belly. The tail color should extend down to the end of the tail. The belly should be light beige. To shade evenly into the body’s color, points should be rich and dark sepia. Eyes of light ruby or red. “Disqualifications” are white spots on the body and feet, as well as white on the tail. These animals should have a cream color with lots of shading and rich brown points. The color should be continued up the back of the rat and fade out towards the middle.

If you breed Agouti, the same thing will occur. The first generation will be all Agouti. The second litter should have three-fourths Agouti and one-fourth Siamese. Agouti is not recommended for an outcross as it can make the points mealy and ruin the Siamese’s color.

You can breed a Siamese and an Albino to create a litter that is all Himalayans. Two Himalayans will produce one-fourth Siamese and one-half Himalayan if they are bred together. It is essential to choose an Albino that is from a background of blacks and has dark feet if you want to make Himalayans.

There are three things you should look out for when breeding Siamese: dark points, white feet, and shading. A Siamese mouse is mostly troubled by white feet. White feet can be all over the place, from the wrist to the end of the hand to the tip of the toes.

White on the feet is bad. The color should be visible from the toes to the nails. However, the feet are not dark enough to see it. Siamese with white toes should be avoided. If you have to breed a Siamese mouse with white markings, be aware that it may take several generations to eradicate the white feet. Outcrossing to a good Self Black, which has pigment down to the toes, is the best way to get rid of white feet.

Although a good Black is a great choice to darken the points and improve the shading, a simple selection works just as well. The best breeding results are often achieved by combining the animals with the most shading and darkest points (and good feet color). The problem is that shading is not evident until six months of age. It is more noticeable in males than it is in females. This makes it difficult to select early and further complicates the situation by the fact that color and shading are determined largely by the temperature of the environment.

Siamese kittens come in a creamy-brown color. The best ones are brown, while the poorer ones have dark shoulders and heads. It takes them until their first molt before they start to develop points, making it difficult to decide which ones to keep. All pets with white feet, toes, or tail tips are best sold. Keep the darkest ones at five weeks. They should also have the best foot color. These kittens will often have the best shading and points, though not always. Keep in mind that even the darkest kittens can look washed out if born during summer.

The litter that results from Siamese being bred to Albino will all be Himalayans. These animals can be described as pure white with dark points. They are often light cream colored and have very light points. These are not being worked on by anyone in Southern California, at least I don’t know. What is often called Himalayan is actually a very light Siamese.

Unfortunately, it is impossible to breed a Flame Point Siamese mouse. People who have tried it say that when Siamese and Fawn are combined, the points become so weak that the animals look pink-eyed whites.

History Behind The Siamese Mouse

UK – The National Fancy Rat Society was given the opportunity to purchase Siamese mice in 1978. Their genetic advisor, Mr. Roy Robinson, offered his assistance in importing the rats, which were then located at a laboratory in Orly (France). The venture was supported by Charshalton Laboratory in Surrey. They also shared the costs of quarantining the animals. The laboratory imported three pairs of animals and kept them. Each litter went to the NFRS. The NFRS also sold PS5 shares, which gave their owners the right to one of the offspring to help cover the cost of this venture.

The animals arrived at the laboratory in September 1978. Their offspring were delivered to NFRS right before Christmas. These kittens were not what we know as Siamese. They resembled Silver Fawn Hooded, with very faint dark eyes. English Fanciers were able to turn those original rats into the wonderful rats we know today with hard work and sensible breeding practices.

The US – A few fanciers from Southern California imported rats from England in November 1983. They included Pearl, Variegated, and Cinnamon Pearl, as well as Chocolate, Silver Fawn and Cinnamon Rex. All of the Siamese I know are descendants of these eight rats, plus some others imported at different times by individuals. (It is possible that Siamese mice were imported from the U.K. by other organizations or individuals I am not aware of.)

On March 31, 1984, The Siamese mouse made its debut at AFRMA. With Samantha, owned and managed by Mike Nez (Best Siamese), seven were entered. A Siamese named Sumi won Best in Show at the next show on May 19, 1984. Mary Macdonald owned her.