HomeAnimalsCat Eye Mantis: Everything You Want To Know About Them

Cat Eye Mantis: Everything You Want To Know About Them 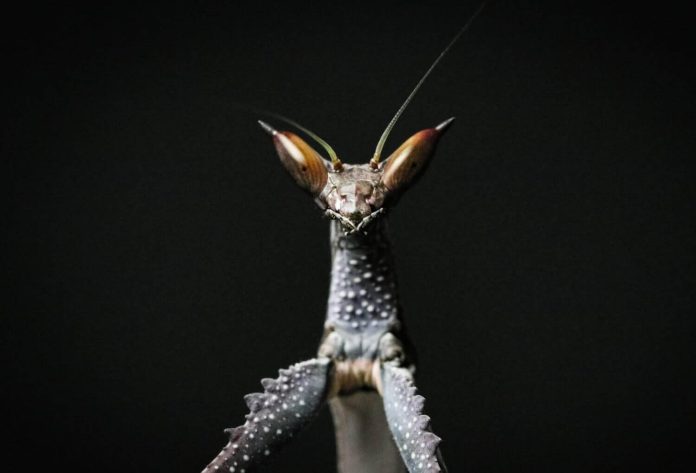 Are you looking for a good pet or trying to learn about a new species? Then cat eye mantises would be something worth looking into. Talking about mantises in general, These fascinating insects can be called by many names, but they are powerful predators. Their triangular heads are held on a long neck or elongated chest. Mantids have two large compound eyes and three simple eyes between them. They can rotate their heads 180 degrees to view the surrounding environment.

Mantis species are usually green or brown and can be camouflaged well on the plants where they live. Their front legs are used to catch their prey, and they have reflexes so fast that it is difficult for the naked eye to see their movements. They also have spikes on their legs for snatching prey and keeping it in place.

This variety of the mantis family is usually called by three names: cat eye mantis/giant African stick mantis/ ‘Chaeta. And scientifically known as Hetorochaeta Orientalis. And this species is relatively new in culture. They are L1 Nymphs and measure just over an inch in length.

Cat eye mantis is one of the largest species in the praying mantis family, with some measuring over half a foot in length. The stick-looking cat eye mantis has a long, slender appearance that looks almost like a piece of a branch. The cat eye mantis has got two conical protrusions at the top of each eye that is distinctive even in the hatchling stage. Cat eye mantis is usually medium-to-dark brown in color and can sometimes show tinges or green during its nymph stage. Red horns can also be seen with blue or green eyes.

Cat eye mantis is an African mantis that originated from central Africa. It was first discovered in Tanzania.

Growth rate and other factors

Cat eye mantis is a slow-growing species of mantis. The first molt lasts approximately two weeks. The last molt may take up to two months. With warmer temperatures and regular feeding, a cat eye mantis can grow faster than other mantids.

How Big Do Cat Eye Mantis Get?

The giant African mantis, also known as the Cat Eye mantis, doesn’t surprise why it has that name. They can grow up to 15cm in size for females and 12cm in males. This species is very similar to a cat and is becoming more popular in the pet world.

The average life span of a cat eye mantis from hatchling to adulthood can be at least one year, and in ideal conditions, it can last for almost two years.

When Do Cat Eye Mantis Moult?

The cat eye mantis will often look for a spot that is camouflaged. From this spot, it will lay upside down and shed its skin. Most cat eye mantis species molt in unison within the same two-day window. Before molting, a cat eye mantis may refuse to eat.

Cat eye mantis is tolerant to high heat and humidity, so living conditions may vary. It thrives best in rooms that are between 60 and 80 degrees F with at least 30% humidity.

Cat eye mantis must be placed in a container that is 3x its diameter and 6x its height. It needs a lot of living space and molting. This is the most difficult part of keeping a mantis.

Cat eye mantis does not require a substrate. However, it is important to maintain at least 30% humidity. A good spray every other day is a good idea. However, They will not die or mismolt if they aren’t given enough moisture.

Cat eye mantis needs a crypsis environment. Birch branches are the best choice. A low-wattage CFL is a great idea for them to attract food sources. They need a wider environment. Their predatory instincts of them are activated when prey flies to the light source. During feedings, sometimes they crowd around the light.

The Cat eye mantis is one of the most communicative mantises I have ever kept and is a cultural icon. Cannibalization is always possible if there isn’t enough food, adequate camouflage, and too much interaction.

The naked eye can’t see any difference in cat eye mantis between males and females until L5. Females are slightly bigger and bulkier than males. Males have larger, more extensive antennae. The arch of the female’s cerci curves downwards just before its two flaps at their abdomen. Males are also flight-capable and have slightly longer wings set.

From The Last Molt Until Copulation

Between adulthood and first witnessed marriage, it takes between 4-6 weeks. This time period is dependent on many environmental factors.

Cat eye mantis oothecae takes approximately 45-60 days from the date of laying to the date of hatching. Living temperatures and hatching shouldn’t be different.

Healthy mantis ooths should be in the 50-60 range. Even the smallest of their ooths can produce 10 mantids.

**OOTHS are not always guaranteed to hatch. It can take up to 10 weeks for them to hatch. They are both fertile and captive-bred, but we can assure you that they are fertile.**

16 Of The Cutest Cat Cankles Every Cat Owner Will Admire