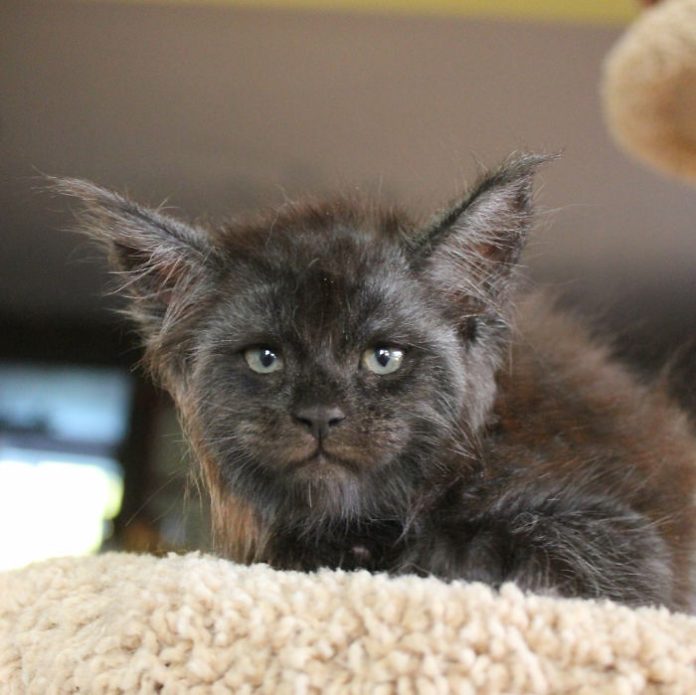 Can there ever be a cat with human face? Well, even we were not sure about it until we came across this black cat named Valkyrie. The Maine coon cat appears as if it’s stepped straight out of one of those what nightmares are made of. And of course, it’s a black one. But don’t ever let yourself judge or hate an animal because of its color.

Valkyrie is a lovely as well as cute cat, is the latest Internet phenomenon precisely due to this. The black cat’s face eerily is reminiscent of a human face, which is extremely unusual for the cat. Tatiana Rastorgueva, the current owner of the adorable Maine Coon shared a video as well as a few pictures of Valkyrie on her Instagram, and the world was shocked to see the cat with a unique face.

It’s unclear what distinguishes her as a human-like cat. Perhaps it’s her look of boredom in her eyes, the round cheeks with a prominent beard, or the bone structure she has. But, a cat sporting a human face isn’t something you see every day.

Scroll down to see the cat pictures, and be prepared to feel a bit nervous.

This cat breed, Maine Coon is a massive cat with a solid muscular, athletic body to match its size. They got large and sharp ears, which look more amazing than what we can express.

The coat is thick and long and is comprised of an undercoat, which is covered by a thick, shiny waterproof top coat. They also are adorned with attractive tufts of hair on their ears and paws. The tails of these gigantic creatures are stunning and the tail grows as long as their body to wrap them around their bodies to increase their insulation.

These Maine Coon cats possess an affectionate personality and are extremely fun and playful. They love human interaction, which makes them great companions for those who love living in a home with a massive cat. Maine Coon cats are noted for the enchanting gentle chirping sound they make.

“I truly love animals and cats. They have always been a big part of my daily life.” Tatyana says. “But I started to breed cats professionally in 2002. I’ve been working in direct contact in conjunction with Maine Coons since 2004. I enjoy my work. I’m able to claim”cats are my obsession.”

Tatyana Rastorgueva’s cats were the result of the breeding between cats from her father Vatican with mother cat Lucien according to Metro News.

“Each cat breeder has their own view of the breed and chooses them by the characteristics which are important for him.” She said.

Tatyana claims that when she was doing her favorite thing, breeding Maine Coons, she focused on the kind of Maine Coons she liked. That’s why the kittens she now has are easily identifiable as having a Human-looking “face” with sharp eyes.

Tatyana often uploads photos as well as video clips of the cats she has been working with, with over the 387k Instagram followers she has.

Octopuses! The most famous, or we would say the best, of the cephalopod family. They are one of the...