HomeAnimalsWhat Does The Mouth Of An Octopus Look Like 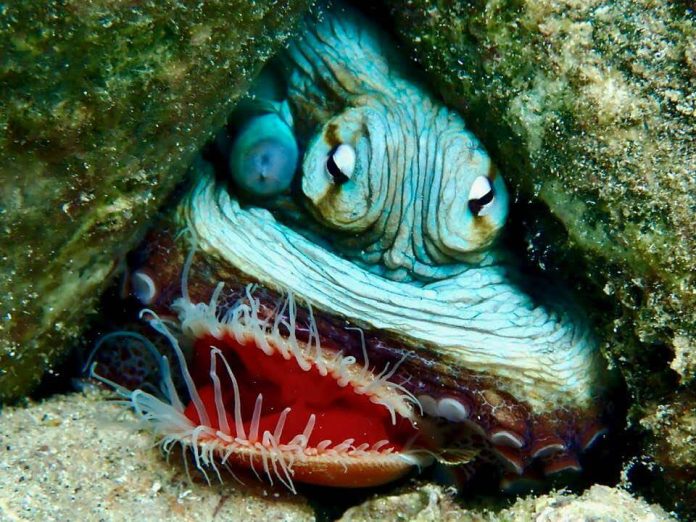 Octopuses! The most famous, or we would say the best, of the cephalopod family. They are one of the most intelligent creatures in the sea, and many people are curious about their habitats, body parts and how they function. In this article, we are gonna cover the most commonly asked question, which is, what does the mouth of an octopus look like.

Octopuses are marine animals that are famous for their round physiques, bulging eyelids and eight arms. They are found in all oceans around the globe. However, they are most plentiful in tropical, warm waters. Octopuses, just like their squid cousins, are commonly referred to as the “monsters of the deep” however some species, or kinds, are found in relatively shallow water.

The majority of octopuses reside on their ocean’s bottom, but certain species are pelagic, which means they live close to the surface of the water. Others octopus species reside in the dark, deep waters and rise up from beneath in the morning and at dusk to hunt for food. Like lobsters, shrimps and crabs are their most-loved food. Although some may be aggressive towards larger prey like sharks.

Octopuses generally drop their heads into their prey by descending from above and, with powerful suctions that form their arms, draw the animal towards their mouths. Octopuses perform their famous backwards swim with water blasting through a muscular tube that is attached to the body, known as a siphon. Octopuses can also be seen crawling on the floor of the ocean by tucking their arms in tiny holes to hunt for food. And large creatures like whales and seals prey on these octopuses.

Mouth Of An Octopus

And the answer to the question, what does the mouth of an octopus look like is, what they got is a beak. Yes, a beak!

It’s difficult for us to envision a marine creature like the octopus, for instance, having beaks. In our minds, we typically associate beaks with birds. Indeed, many dictionaries define the beak as a hard projection structure that is the mouth of a bird.

But, beaks are not just a characteristic that is restricted to birds. Cephalopods of all kinds, including the octopus, have two-part beaks that are hidden within their mouths.

The mouth of an octopus is difficult to see since it is hidden within its middle in the web, which connects the eight arms of the Octopus. However, this small and hidden portion of the Octopus can be a deadly weapon in reality.

The Octopus’s beak is hard and retractile. It resembles the beaks of parrots. It is composed of chitin. It is an effective and incredibly powerful tool. It has enough sharpness to cut the flesh off of its prey and strong enough to crack the shells that clams have. Behind the beak, there is the salivary gland of the Octopus in which the poison is created and where it’s delivered to the prey via the beak.

Parts Of An Octopus Beak

As previously mentioned, the beak is comprised principally of two components, which are referred to as the upper and lower beak.

The two parts are made up of two primary elements The outer layer, known as the hood, and the inside layer, also known as the wall. These two layers are joined together by two additional components that are referred to as the shoulder and the bridge. The shoulder and bridge aren’t permanent parts and are rather flexible and allow for the mouth to be moved in an identical manner to cutting scissors.

Inside Look Of The Beak, Known As The Radula

Pretty sure you were curious about this one; Octopus’s mouth has a tongue as well, which is known as the radula. The radula lies between the beak and the poison gland. It’s used to remove the flesh of the victim from its shell. Because the octopus’ preferred food items include crabs, as well as other crustaceans, the radula can be an essential organ.

Below the radula, the octopus has a second useful instrument called the salivary papilla. The papilla is a muscular structure, and its front is covered with tiny teeth. Imagine a drill that could let loose a weakening substance while it slowly opens to the inside of the predator. It’s a dangerous tool for sure!

What Is Left Of A Meal

The beak that the Octopus has is indigestible. This means that it doesn’t break down within the stomach of predators of the Octopus. Since the Octopus doesn’t have bones or other solid parts apart from its beak, the beak is the sole method to determine if the Octopus is included in the diet of the animal.

Thus, the beak can be extremely useful in determining the dangers the Octopus has to face by revealing all its predators. Additionally, it provides scientists with an extremely accurate understanding of the position and function of the Octopus and the other cephalopods in the ecosystem. For instance, though it’s never been seen, however, we know that sperm whales eat Giant Squids as several of their beaks were found inside their stomachs.

When It Comes To Beaks, Size Always Matters

Additionally, beaks are crucial because they provide information about the Octopus when the Octopus isn’t anymore in the vicinity. By taking measurements of the size of both the parts of the beak (upper and lower), scientists can estimate the length of the mantle as well as how much weight is carried by the Octopus.

This type of data could be used to demonstrate the history of cephalopods, the way and how the evolution of octopuses took place, and what size or how small the species of Octopus which no longer exist. Naturally, it’s an extremely difficult job to determine a species from its beak. Experts have to have taken measurements of the beak of a species so that they can draw comparisons. There are species of Octopus for which scientists are able to examine only the beaks of younger individuals or where there are no measurements that have been recorded.

Beaks and the size of their beaks are crucial when we want to understand the mystery surrounding the Octopus and its species.

This is an octopus eating a clam (flame scallop). Sure does look like the octopus has a big red mouth.

This Naked Owl Left The Internet Speechless With Its Looks