HomePeopleDelvar Dopson, A Garbage Man, Got Surprised By A 3-Year-Old Girl 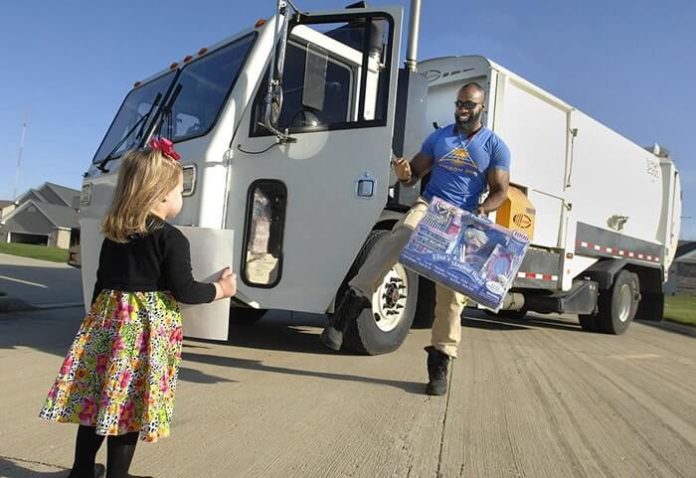 A beautiful story in Illinois went viral, and it was about a garbage man, Delvar Dopson, who got surprised by a little three-year-old girl named Brooklyn. And how could we not share this heartwarming story here!

Garbage guys are used to collecting junk. That’s, in fact, their job. However, one garbage man from Bloomington, Illinois named Delvar Dopson, recently received something completely unexpected, a birthday cupcake from his biggest fan, a 3-year-old girl named Brooklyn Andracke.

“Each Thursday, my heart is filled when I witness the joy that our wonderful garbage man gives Brooklyn when they honk and wave at her with a huge smile,” said Brooklyn’s mom via the city of Bloomington Facebook page. “And today…Brooklyn and I wrapped one of the birthday cupcakes and waited patiently for the garbage man to arrive. When he came down the street, she raced across the street to the next corner. He stopped and got out of the truck, giving us his huge smile. Brooklyn was speechless when she presented him with the cake. I told him that he’s the one who makes every Thursday a special day, and we appreciate the wave and honking and what a special day it is for us.”

Keep reading on because there’s more to come!

“My Heart Is Filled With Joy When I Witness The Joy Our Wonderful Garbage Man Brings To Brooklyn,” Said Brooklyn’s Mom

Brooklyn Is His Biggest Admirer. Brooklyn Is Waiting For Him Every Thursday!

It Was Her Birthday Recently, And She Wanted To Gift Him One Of Her Cupcakes

“I Told Him That He Is The One Who Makes Our Every Thursday,” Said Brooklyn’s Mom

However, The Story Doesn’t End Here, As Delvar Brought His Own Surprise For Brooklyn Next Week!

“He Came Up With The Most Incredible, Amazing, And Generous Birthday Presents For Her”

“His Kind Gesture Toward Her Has Touched Me In a Way That I Cannot Describe. Thursdays Rock! We Appreciate It, Delvar Dopson!”

Wonder where is Delvar Dopson now in 2022? He is doing well, and he’s a motivational speaker for more information you can check out Delvar Dopson’s Instagram.

There is a constant discussion about how clever and cunning cat breeds are. Sometimes, we overlook the fact that...